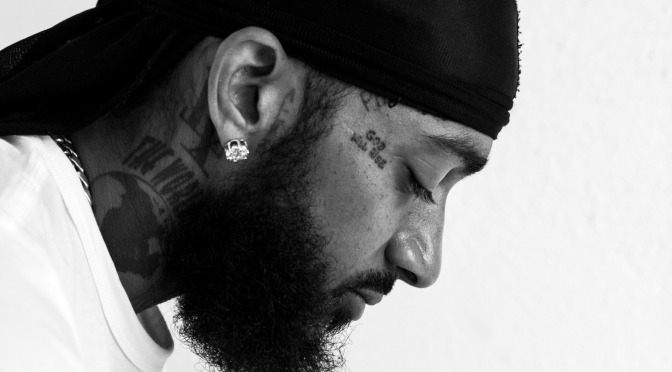 Born on August 15, 1985, as Ermis Joseph Asghedom – Nipsey Hussle (his stage name, often stylized as Nipsey Hu$$le) would later pass away on March 31, 2019, from fatal gun shot wounds in front of his clothing store.

Emerging from the West Coast – Ermis Joseph Asghedom was born in Crenshaw, Los Angeles, California to Angelique Smith (African American woman) and Dawit Asghedom, an Eritrean immigrant. He was apart of the Rollin’ 60’s Crips gang and, at the time, an aspiring rapper – who, soon, became a neighborhood legend and local hero to his community.

Nipsey Hussle would later, go on to become an independent rapper releasing his first mixtape “Slauson Boy, Volume 1,” which would gain him local success in the hiphop and rap music industry. This also led him to sign with Cinematic Music Group and Epic Records.

He [Hussle] released numerous mixtapes over the years, including his Bullets Ain’t Got No Name series, The Marathon, The Marathon Continues, and Crenshaw – the last of which rapper Jay-Z bought 100 copies for $100 each. After releasing a free digital download [his ninth mixtape] titled ‘Mailbox Money’, on December 31, 2014 – he releases his debut studio album Victory Lap hesitantly, four years after, in 2018 to critical acclaim and commercial success. Nominated for the Best Rap Album at the 61st Grammy Awards in 2019, he would follow up with two posthumous Grammy Awards for the songs “Racks in the Middle” and “Higher” in the ‘Best Rap Performance’ and ‘Best Rap/Sung Performance’ categories, respectively, the next year at the 62nd Grammy Awards.

The Mogul, Activist, and Leader

Hussle’s nickname came from his entrepreneurial spirit, he was a hustler. Some people may get that word confused with being a shiesty person but, the term would be used in the form of an ambitious person, and not negatively. He [Nipsey] shined shoes for $2.50 to pay for school clothes at the age of 11 with a goal of a hundred shoes per day. He sold mixtapes out of his trunk at a neighborhood strip mall at the intersection of Slauson Avenue and Crenshaw Boulevard. Leaving Epic Records, he founded his own record label (All Money In) and shortly afterwards, opened The Marathon Clothing Store on June 17, 2017 – along with partners Steve Careless, Karen Civil, and his brother Samiel Asghedom – and started a co-working environment which he named “Vector 90”. This provided opportunities within his neighborhood of Hyde Park.

The store would be billed as a “smart store”, bridging the gap between culture and technology by giving customers access to exclusive music and other content created by rappers through an app developed by software engineer Idris Sandu. Preceding his death, a year earlier, he would buy the entire strip mall on that corner.

The Death of A Star

A year later, on March 31, 2019, Nipsey Hussle would become the victim to hatred and senseless gun violence. He was shot at least 10 times in the parking lot of his store, Marathon Clothing, in South Los Angeles at about 3:19 p.m., along with two other victims of the shooting – whom both survived.

Nipsey would later be pronounced dead at 3:55 pm. He was only 33 years old. The suspect, Eric Ronald Holder (29 years old), was a familiar person and friend of the late rapper. He was arrested on April 2, 2019 by the Los Angeles Police Department.

Read on the events that led up to Nipsey’s death

Some conspiracy theorists would lead other to believe that he was sacrificed or assassinated due to allegations of working with the police force and high school officials, in order to stop gang violence within the community. A situation that could bring a positive outlook on the community could possibly be incoherent to the governments systemic control of black people all over the world. The same theory applies to the killing of Tupac Shakur, whom most people still believe is alive. Who knows, right?

Leaving behind not only his ideas, manifestations of success, and inspiration on an entire urban/hiphop culture – he [Hussle] is survived by his wife/actress, Lauren London, their son Kross Ermis Asghedom, and his daughter from a previous relationship – Emani Asghedom.

Nipsey Hussle would leave his mark with an intersection renamed after him. The used to be corner of Slauson Avenue and Crenshaw Boulevard near Hussle’s store Marathon Clothing, would later be petitioned for change to “Nipsey Hussle Square”, to honor him and his contributions to the neighborhood.

Nipsey’s death would go on to bring music celebrities, fans, and organizations together in a multitude of ways via online [social media posts] and offline {e.g. murals, special guest speakers, and foundations]

We will remember your name and legacy brother.