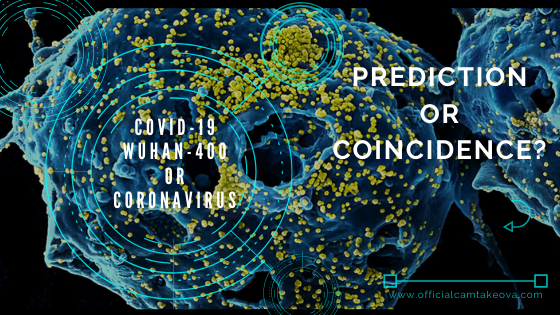 Wuhan-400, COVID-19, or Coronavirus? As most people are calling it whatever they feel, there are some who are calling it anything but, a coincidence. Since the 2019 outbreak, ‘COVID-19’ – which is the scientific term for the coronavirus – has created the largest global scare since SARS, Ebola, and even HIV/AIDS. Now being classified as a pandemic by WHO (World Health Organization), this rapidly spreading virus is causing havoc across parts of the world and on the entire U.S. economy as we speak.

-2013.76 –> The largest drop in points ever for the Dow Jones Industrial Average, was recorded on March 9, 2020, as fears rose over the spread of coronavirus. The second biggest drop (1,465 points) came just two days later. With concerns about a possible pandemic, an innumerable amount of stockholders are pulling out and the market is falling at an alarming rate.

In the 1981 novel “The Eyes of Darkness”, author Dean Koontz predicted the 2020 new coronavirus outbreak.

There is an image of a genuine page pulled out of Dean Koontz’s “The Eyes of Darkness” novel, containing the words “Wuhan-400.”

I’m honestly, not sure what’s false – when it comes to this virus, besides the fact that the fictional biological weapon has little in common with the coronavirus outbreak of 2020 . It is, however, a big coincidence that this was even written in the first place, right?

Biological weapon or a major coincidence?

That is the million-dollar question at hand here. Although this book was released in 1981, the story has alarmed Koontz fans from around the world – as well as, conspiracy theorists. Everyone’s trying to get their hands on this book.

When readers came across the name “Wuhan-400”, used to describe this specific biological weapon in Dean Koontz’novel “The Eyes of Darkness”, we doubt that anyone had any assumption that the famous thriller author was “predicting” a real-world outbreak of COVID-19, coronavirus disease. But when the media issued press releases in February 2020, after such an outbreak had occurred, observant Koontz fans quickly took to social media – a genuine passage from the novel, with allegations of a prediction at hand, from the author.

This is a genuine page from the novel “The Eyes of Darkness.” The passage can be seen in Amazon’s preview of a mass market paperback edition of this novel that was released in December 2008.

Here are a few things this “prediction” gets wrong:

It’s true that Koontz named a fictional biological weapon “Wuhan-400” in this novel. It’s also true that Wuhan, China, is the city at the center of the 2020 coronavirus outbreak. However, that’s pretty much where the similarities end.

But there’s more bad news for this prediction.

While the page from Koontz’s novel displayed above is genuine, other iterations of this book used a different name for the fictional biological weapon. In fact, when we searched a 1981 edition of this book available via Google Books we found no references to “Wuhan.” In that edition, this biological weapon is called “Gorki-400” after the Russian city where it was created.

We’re not fully sure when or why this change occurred. From what we can tell, the biological weapon was originally called “Gorki-400” when this book was published in 1981. But by 2008, the name had been changed to “Wuhan-400.”

Regardless of when “Wuhan-400” made its way into Koontz’ novel, this is not a prediction. Koontz did not claim that the events that took place in his novel would later come to fruition, and the similarities between “Wuhan-400” and COVID-19 are minimal. Furthermore, readers only noticed this “prediction” after an outbreak of coronavirus was reported in Wuhan, China, which makes this “prediction” nothing more than a coincidence.

Let me know your thoughts on this subject below: