Jay Z will release his new album 4:44 as a Tidal exclusive on June 30th. The LP is the rapper’s first since 2013’s ‘Magna Carta Holy Grail’.

There were pre-speculations of something in the works when signs, posters, and billboards were popping up out of thin air on buildings, subway stations, and walls. It was soon revealed that 4:44 was, in fact, part of an upcoming Tidal-only film starring Mahershala Ali, Lupita Nyong’o and Danny Glover. 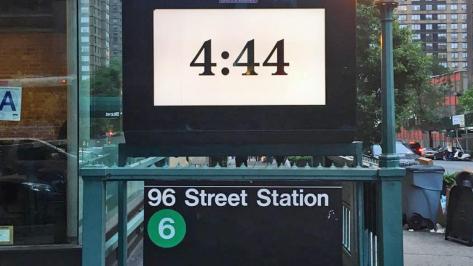 A clip from that film included a snippet of a new Jay Z track titled “Adnis.”

On Monday morning, Sprint, which has a partnership with Tidal, formally announced it’s imminent arrival of 4:44 exclusively on sprint.tidal.com, with an ad on the front page of Tidal.

It reads: “Become a Sprint customer and get 6 complimentary months of TIDAL and access to JAY-Z’s album 4:44

The TIDAL and Sprint partnership will support the 1Million Project, an initiative that will connect 1 million low-income U.S. high school students who don’t have internet access at home.”

There is no notice of how long it will be featured or available on the site so, unless you plan on missing out on this highly anticipated and epic moment, please sign up on TIDAL today, and get exclusive access to the album/short-film.

Jay Z will hit the road this summer in support of 4:44, including stops at festivals like his Made in America, Austin City Limits and Meadows.